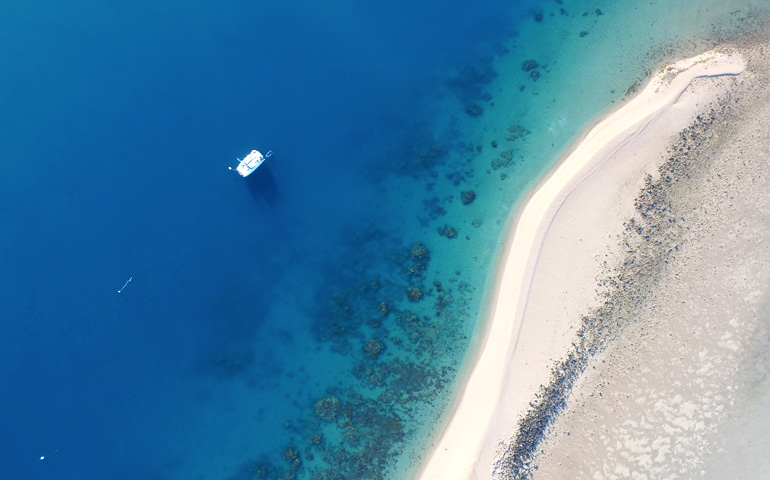 While there are a total of 74 islands that make up the Whitsundays, the cluster of islands lying off the coast of Airlie Beach are in fact the largest group of offshore islands in the whole of Australia. Whitsunday Catamarans spend a good part of their trips snorkelling around the north end of the Whitsunday islands. This is where you will find some of the best fringing reef systems brimming with an abundance of marine life.

There are not usually set itineraries as each trip will vary according to the weather, but generally you will sail around the Whitsunday Islands stopping to swim, snorkel and explore on the fringing reefs. Weather and tidal dependent, a typical two night tour will aim for three to four separate snorkel sites. In the evenings the boat will moor in bays and drop anchor to watch the sunset, have dinner, drinks and relax!

As the second biggest island in the Whitsundays group, Hook Island has a little bit of something for everyone. The snorkel sites around the north side offer some great variation in coral formations. It is also home to some of our largest Maori Wrasse as well as the seasonal meeting place of Manta Rays.

Hook Island is also home to an observatory that was built in the 1960's. Although it survived through two cyclones, the observatory is now sadly closed although will not be dismantled as it remains part of the Whitsunday islands history.

Pinnacle Bay is situated at the northernmost tip of Hook Island. There is a small old lighthouse on one point which provides an interesting climb with nice views from the top. The waters of the bay are generally very clear and there is good snorkelling.

On the south west side of the island the beautiful Nara Inlet was once the seasonal camp to the local Ngaro Aboriginal tribe. The cave paintings and an information centre is a great place to get immersed in the islands history that is thought to date back over 8000 years!

This idyllic island is at least twice the size at low tide as it is at high tide! With a hill of bushland making up the north end of the island and a sandbar stretching almost a mile south, the high tide totally washes the majority of the island away at least twice a day. On either side of the sand bar is reef, starting at the beach and dropping gradually off to 15 metres. A great spot for first time snorkelers, with easy access to its fringing reef from the beach and shallow waters, this is also a great place to spot turtles!

These are 2 of the smallest islands in the Whitsundays and although it is possible to snorkel around these beautiful islands it is prohibited to set foot on either one as they create a sanctuary for bird species such as the white-breasted sea eagles to nest in peace.