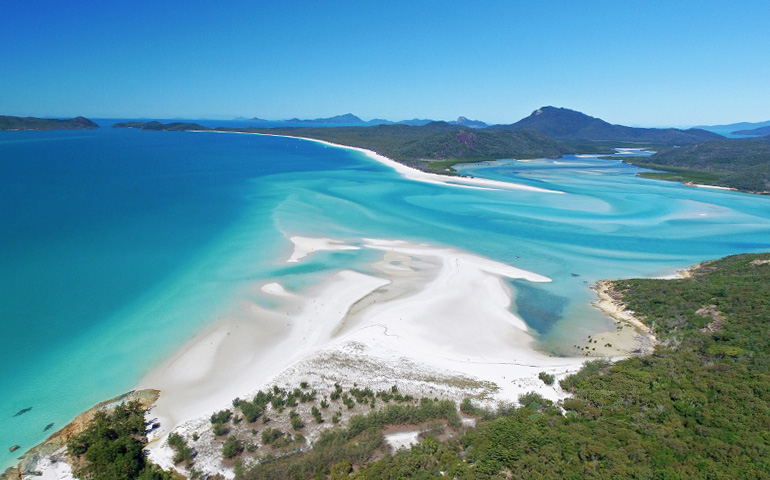 The southern islands include Whitsunday Island, which the Whitsunday island group is centered on, as well as Hamilton Island, the commercial centre. Whitsunday Catamarans will sail down to the southern end of the islands during your trip to spend time on Whitehaven Beach and to explore all that this area has to offer.

Whitsunday Island is the largest island in the Whitsunday island group. Located off the coast of Airlie Beach in far north Queensland, this island is also home to Whitehaven Beach, one of the most iconic beaches in the world. This island is completely uninhabited but was once settled by the sea-faring Ngaro people thousands of years ago. Whitsunday Island was named in 1770 when Lieutenant James Cook landed on the east coast of Australia.

On the east side of the island you will find the famous Whitehaven Beach, stretching an impressive 7 kilometres long and creating awe inspiring photographic opportunities. The sands of Whitehaven have been drawn up from the depths of nearby volcanic passages from ground-down quartz crystal. The fine 99.8% silica sand is said to be so pure that it was used for the lenses of the Hubble Telescopes!

The opposite side of Whitsunday island has some deep channels running through it which make for some great inlet anchorages. Cid Harbour is still a popular overnight stop for many boats visiting the Whitsundays including on occasion our catamarans trips. The bay here creates sounds to send even the most insomniac of people to sleep; with the calm waters echoing the sounds of birds, frogs and kookaburras amongst other forest dwellers.

Hamilton Island is nestled in the south of the Whitsunday Islands and is one of the most popular islands for locals and tourists alike. Offering an idyllic island experience in pristine surroundings, Hamilton boasts a multitude of activities to suit all travellers, from watersports to helicopter flights to ‘Breakfast with the Koala’s’, there is plenty to see and do. Of course you may decide that while you are in this island paradise you might simply do nothing at all and lay by one of the many pools or beaches with a cocktail and a good book.

Hamilton Island is also the most populated island with 1500 permanent residents and a constant influx of transient visitors. The north east side of the island has holiday resorts and penthouse style luxury villas looking out over the Whitsunday Passage. The east side of Hamilton Island has a marina big enough to accommodate up to 300 boats and an airport that has regular flights to and from city airports up and down the east coast of Australia.

Border Island is a small island near Whitsunday Island which boasts some of the best snorkelling in the Whitsunday Island group. As this area of reef is a ‘Green Zone’ it is protected from fishing which allows an abundance of sea life and coral of all varieties to flourish.

There is also a sandy spit which makes a great area for sitting back and relaxing or for the more energetic, a climb to the saddle between the peaks of Border Island offers some excellent views.