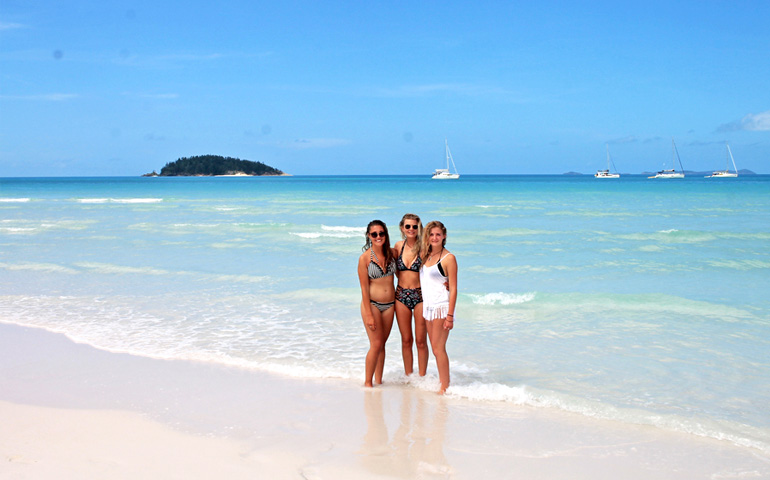 Whitehaven Beach is known as one of the best beaches in the world.

Located on Whitsunday Island, the largest of the 74 islands in the Whitsundays, Whitehaven Beach stretches over seven kilometres and boasts brilliant silica sand which feels cool to the touch and is among the purest in the world. Time seems to stand still as you stroll along the pristine shoreline and feel the soft white sand squeak between your toes. Boasting 98% pure silica sand, it is believed that these sands were brought to Whitehaven via prevailing sea currents over millions of years, to eventually form the iconic beach that it is today. Due to the high silica content, the sand on Whitehaven has a fine, powder-like consistency and doesn’t retain heat, meaning you can comfortably walk along the beach at any time of the day.

At the northern end of Whitehaven Beach is Hill Inlet, a stunning cove where the tide shifts the sand and water to create a beautiful fusion of colours. Many people claim that Hill Inlet and Whitehaven Beach are among the most beautiful places they have ever seen and this is one of the reasons why this area is such a drawcard for visitors from all around the world. During your boat trip you will be taken on a short walk through native bushland to the lookout at Tongue Point which is the best way to capture a postcard worthy photo of this amazing view.

Many boats will also anchor at the southern end of Whitehaven Beach where you can swim ashore from your chosen catamaran and feel as Captain Cook and the first settlers did when they sailed through the Whitsundays nearly 250 years ago.

Recently voted ‘Best Beach in the South Pacific’ and ‘Best Beach in Australia’, Whitehaven has also won the title of ‘Australia’s Most Beautiful Beach’, ‘Queensland’s Friendliest Beach’ as well as ‘World’s Best Eco-Friendly Beach’ and a place in ‘World’s Top Ten Beaches’. With all these awards under its belt, it is easy to see why this is the most photographed beach in the entire world.